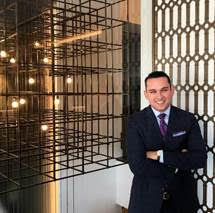 Leyva received the honor at the organization’s annual Stars of the Industry Awards Event, which has recognized the best of the best in the hotel industry since 1996.

(CHICAGO) — Oxford Capital Group’s LondonHouse Chicago (85 East Wacker Dr.) General Manager Juan Leyva was named Hotelier of the Year by the Illinois Hotel and Lodging Association (IHLA) on December 15th, 2021, at the organization’s annual Stars of the Industry Awards Ceremony for his exemplary achievements, contributions, and leadership. The award, presented by DePaul University’s School of Hospitality Leadership, is the highest honor given to an IHLA hotel General Manager or Area Director based on professionalism and service to the property, their employees, guests, and the community.

“On behalf of our Founder, Chairman, and myself, the Oxford team could not be more pleased that Juan has been named IHLA Hotelier of the Year,” says George Jordan, President of Oxford Hotels & Resorts, LLC. “It is a testament to the hard work, determination, and passion he has displayed every single day since he joined us six years ago.”

Leyva came to LondonHouse in December 2015 as Director of Operations prior to the hotel’s grand opening in 2016, overseeing the growth of the hotel and its staff before his promotion to General Manager in April 2017. In February 2020, he became the Vice President of Operations of the Central Region for Oxford Hotels & Resorts, LLC, maintaining his General Manager role.

In his day-to-day, Leyva manages a team of over 300 employees at the 452-room luxury lifestyle hotel in the heart of Magnificent Mile in addition to collaborating with other General Managers and assisting in running successful operations at all of the Oxford hotels in the Central Region.

His Hotelier of the Year recognition comes after a string of awards throughout his career. In the fall of 2016, Leyva was awarded a place on Hotel Management Magazine’s “30 under 30” list of the industry’s most promising young professionals. In 2019, he was named a General Manager to Watch by Hotel Management Magazine and to Chicago United’s prestigious list of Business Leaders of Color.

LondonHouse has also earned several accolades during his tenure, including Best Hotel with Meetings/Event Space by Illinois Meetings & Events Magazine and recognition as the top hotel in Chicago by TripAdvisor and the No. 2 rooftop in the nation by Big 7 Travel.

Despite his many recognitions, the General Manager says the most rewarding part of his job is developing future leaders in the industry. He states that through working hard and believing in oneself anything is possible, as he humbly recalls his own career journey beginning a short time ago in a hotel parking garage.

“As I receive this award, it’s sometimes hard to believe that this started in a parking garage booth opening gates for hotel guests 16 years ago,” says Leyva. “I want to thank my superiors at Oxford for believing in and taking a chance on me, Michael Jacobson and the team at the Illinois Hotel and Lodging Association, my team at LondonHouse Chicago, my wife, Marisol, and two sons, Lucas and Mateo, who have supported me every step of the way and without whom this would not have been possible.”

About Curio – A Collection by Hilton
Curio – A Collection by Hilton (curiocollection.com) is a global collection of distinctive hotels that are woven into the fabric of their destinations. While each one is unique, they are united in their individuality. Curio guests are passionate travelers seeking local discovery and authentic experiences, while resting easier knowing the Hilton name is behind every stay. Curio joins a portfolio of market-leading brands from Hilton Worldwide, a leading global hospitality company. Access the latest news at news.curiocollection.com or inquire about development opportunities at hiltonworldwide.com/development.